You are here: Home › Countries › One month of “travelling”

One month into an uncertain travel can mean anything.

Crossing ten countries, spending it in one place or traveling around within the same borders. Looking back, I think I would have predicted being on the sailing boat already, helping to get it ready for the upcoming journeys.

That has not been the case and in terms of physical travelling I did not advance as far as I would have thought in the beginning. I am still living on the house boat with Michelangelo and his partner – Amy – and saying “I spend my days […]ing” would simply be wrong as each day can end up turning out completely different than the last one. New opportunities arise daily and I will not know of them more than 24 hours in advance. In the last month I’ve been to Nice (shortly), Monaco (even more so) and Sanremo (frequently). I’ve been stopped by the police twice, helped to get a classic sailing yacht out of the water, joined on board for a ship relocation, burnt our lunch twice – even though by all logical means it should not have been possible – and spent hours and hours talking about every kind of topic you can imagine.
Oh, and I saw the sailing boat we want to take for the first time! But everything in order.

Even though I’m still in Italy, I got the opportunity to take a look at Monaco and Nice. Amy had to take care of a few things there and I went along to take a closer look at those cities. We had about half an hour in Monaco (full gallery here), so not that much.

Nice gave me a bit more. Nearly two hours, but on both opportunities it ended up being a simple photo journey whose results you can find in my recently added gallery section.

And yes, I seem to have an affinity with cops. A negative one, as they seem to pick me out of the crowd precisely. I found out about that straight after taking Michelangelo’s car for the first time. He has a small car I lovingly dubbed Rennsemmel, which he gave me permission to use from time to time. Who could refuse such an offer? I got the keys, packed my equipment (camera, GoPro, some water) and left the harbour towards the “car park” (a topic for a whole new post later on: Italien parking and driving!).
Taking the road out of the car park and down the road, I wanted to take it slowly to get used to the new car and a completely different driving style. I did not even manage fifty meters before cops pulled me out (and the street was full of other cars!)! With my lack of Italien and their equal level of English – speaking more than a few words of this language is quite uncommon among the Italians here – they managed to make me understand that they wanted to see my papers. After searching through half the car, I found a big package of paper. Completely soaked, the window seemed to have been open overnight. Plus, I did not even know what the required papers looked like and therefore had to give the cop the whole bulk, hoping that he would find the right document inside. With that, I earned a reproachful look mixed with what I hoped was an amused expression as he pulled a folded blue-ish piece of paper out of the stack and took it to his collegue. After taking my particulars, they asked me to put them out to dry and let me go.
To this day, I have no idea of why they stopped me and neither what they needed those information for. Anyone able to help me out here? Michelangelo, Amy and I had a few theories but none of them seemed to be too convincing.

The second time I met the cops, I did not even manage fifty meters; the cops stopped the bus I wanted to take to Sanremo just as it pulled into the bus stop. Simply because it had a leak. I’d love to know what happens if I try to take the train here for the first time…
Going to Sanremo was still on the plan though and after waiting for the next one, I even managed to get there without further delay to help out Michele with his boat. A few days before, we had gotten it out of the water and onto the shore to do a few repairs on the hull.

Back then, we were put into a construction quite similar to the shown one (obviously without the covers); for that, the frame had been be lowered into the water and we brought the ship between them. Afterwards, we attached ropes to the single arms of the construction and tightened the boat so that it would not tip later while leaving the water. The main support comes from the bottom of the frame on which the boat will rest during its stay onshore, supported by poles we added later on.
Mahana (that’s the name of the boat) is mostly made of steel, requiring the owner to take care of the rust inside that’s slowly eating through the hull. That happens automatically over time and sometimes you’ll have to replace a part of it with a new sheet of metal, therefore requiring the boat to leave the water. At the same time the paint will be redone, a few scratches will be taken care of and the carving on the bow renewed. 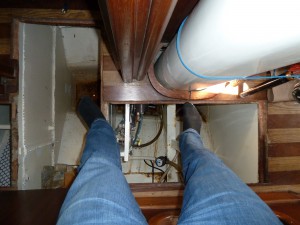 Mahana’s bilge a few hours into the work

Since Michelangelo is still not really fit yet, I have quite a bit of free time at hand, some of which I spent helping out on the Mahana. Generally that can include all kinds of things, but in my case I mostly got rid of the rust within the bilge. For that, you have to imagine squeezing into a confined space with a hammer and lamp, trying to find a – more or the less – comfortable position and then start hammering. As hard as you can, full on hit any brown spot you can find.
By the way, you have my feet on there for size comparison. That would be a European 44 (9.5 British, 10.5 American), therefore probably giving quite a good impression of how “well” I fit in there. Interesting thing to do for a while though, I can’t deny that.

As you can see, I’m trying to chicken out of saying anything specific in the regards of when Michelangelo, Amy and I will start ourselves and get onto the water. Simple reason: I don’t know. And that’s a whole topic on itself, but simply put the plan changes every day. There are still quite a few things to be done on the sailing boat (literally a work in progress, nothing finished), Michelangelo’s health is worrisome and getting the boat ready is not cheap. So, what can I say? We’ll get there. Eventually.
We already started cleaning up and got the boat out of the water as well – though we got put back by the port because of unexplainable reasons – as we had a little osmosis on the hull and a few scratches to fix. Osmosis? Yes, it’s not really the correct term as it originally is the name for a certain physical progress, but for people working with boats it has a different meaning. It is a boat’s cancer, simply put. A symptom that can be seen on plastic boats, as they develop small blisters filled with acidic acid that will damage the fiberglass over time and need to be taken care of once in a while. Yachtsnet’s Osmosis page offers quite a comprehensive article about it. Take a look there if you’re keen to have a read about the details.
But back to topic. The way things are looking right now, we hope to be heading south to Corsica on the 19th and from there we’ll see how we go. As soon as I can tell you more about our plans, I will. Until then I’ll leave you with a few pictures taken over the last few weeks while exploring Imperia and its surroundings. Here you can find more!

2 Responses to "One month of “travelling”"

I am currently in:

Back in Germany; study break